Value #3: It is Valued Work to Uphold and Serve Our People

How Daylight Was Stolen 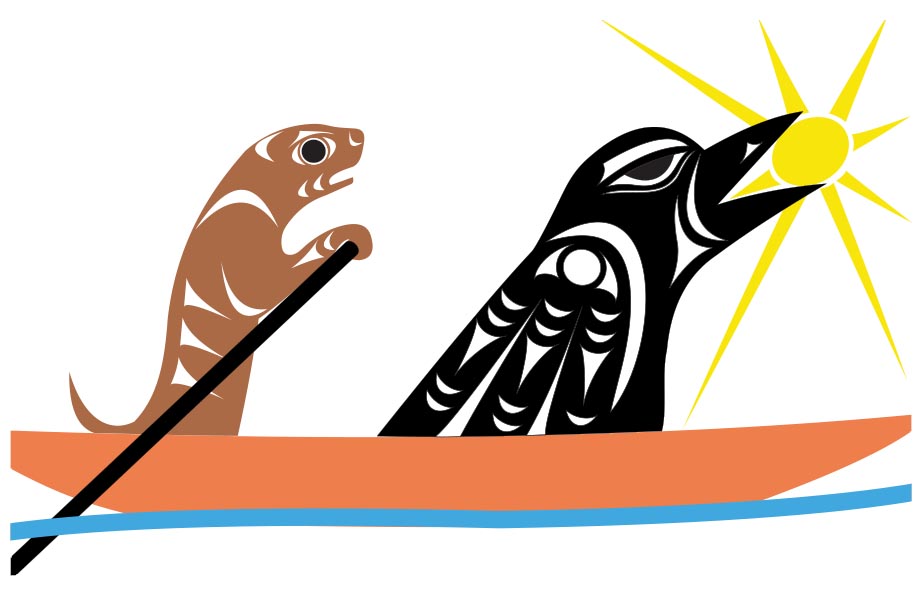 There were two young men who began to prepare themselves. They bathed. They trained so they would be light on their feet when they ran. It was Raven and Little Mink who were preparing themselves to be of use to their people.

They lined up canoes – probably they had shovel-nosed canoes – but they found out that they could not jump over all of them yet. They got two canoes turned over and lined up side by side to jump over. They trained for a long time to be light on their feet when they ran. After a while, they had three canoes turned over and lined up that they were jumping over. When they had four canoes in a row and could jump over them, they had reached their goal. They thought, "Now there is no one who could catch up with us. We have trained enough to be able to go and get the daylight at the place where it is kept."

Little Mink and Raven set out in their canoe. They poled upriver looking for the daylight. Just as they were getting close, light came down upon them, all around them. They stopped and pulled back a little way and watched. It would be light for a long time and then it would get dark again. That’s how they knew: "We are almost there." They left their canoe and walked. They walked until they came to the place where the light was. There were people living there.

They had to decide now: "Which of us will capture the daylight? There might be trouble if both of us went, because people might figure out we were after the light. We have to steal it from where it is kept in a longhouse with people all around."

Little Mink said, "I will be the one to go. I will pretend to be a little old man with gray hair, very feeble. I will be walking with a cane when I go inside and look for the owner of daylight. That is where I will be." Raven said, "I will stay here. I will wait for you to bring it. You will be holding it in your arms when you get here, and then I will take over from you."

Little Mink took off running. He ran until he got to the place where the owner of daylight was. Then he went on like a little old man with gray hair walking with a cane. The people saw him: "Oh, someone from another tribe has come." Little Mink said, "I am homeless. I don’t have anything to eat. There is no one where I live who treats me right, so I have come looking for a place to stay, here where the owner of daylight lives, somewhere where I can find a bed and be treated right." The owner took this poor old man and said, "Over there in the back is a mat where you can lie down. You will be safe there." But the old man said, "No, I need to go outside from time to time at night, so it would be better if I could be by the door." So they made a place for him to lie down there by the door.

He stayed there watching what they did with the light. He just kept watch. When the sun got over to one side, it would little by little get its face squeezed up. This is how darkness increased. Little by little the sun’s face would be tied up. It would be darkness now. All of this was watched closely by Little Mink.

When he had been there three days, Mink went after the light. But he couldn’t get his hands on it. He is still far from it when it starts getting light again. Right away Mink runs and lies down on his sleeping mat. He is covered with ash from the fire, because he blew on it and it flew up and settled back down on him.

The people in the other part of the house noticed something. "Why is the daylight blinking on and off?" The old man lying near the door and covered with ash because has not moved all night is looking at the blinking light.

When night came, Mink got up again. Four nights he went after the light, until on the fourth night he touched it and got a grip on it. That is when he grabbed it and ran off with it.

But they chased him. He kept going under logs. They couldn’t catch up with him because he was so light on his feet. He jumped over logs until he got to his friend Raven and tossed the sun over to him.

His friend was being chased. Way out in front, he would be going under logs; then, over in another place, he would be jumping over them as he ran. There is no one and nothing that can manage to catch up with this little guy who is so light on his feet. Wolf, Cougar, they chased him. But there was nobody who could catch up with him, because he was just light on his feet.

They ran and flew until they got to the canoe and got in and shoved off. Just as soon as there were on their way downriver, it got foggy. Little Mink said, "I have a spirit power. If I point out a place, that place will get fogged in." Fog covered them, and the people who were chasing them got lost. So Little Mink and Raven went on, and they brought this daylight home.

As they were coming in to shore, getting closer to the land they are from, there would be times when the people would be covered in sunlight. "Oh, they are coming now, the men who were looking for daylight. They are closer now, light is covering us." They brought the daylight to the land where they were from.

And Raven took charge of the light first. He was the one who managed it. Just as soon as it would be getting dark, it got light again. "How will the people sleep? It is already getting light again. It is happening too fast." Then it was given to Little Mink. This time, it was night for a long time and then it would get light again very slowly. Mink knew how, because had had watched the way the upriver people used their hands to do it. But Raven was too fast. As soon as it got dark, it got light again. How were people supposed to get their sleep when it always gets light again right away?