Value #4: We Work Hard and Always Try to Do Our Best

The Story of the Salmon Ceremony 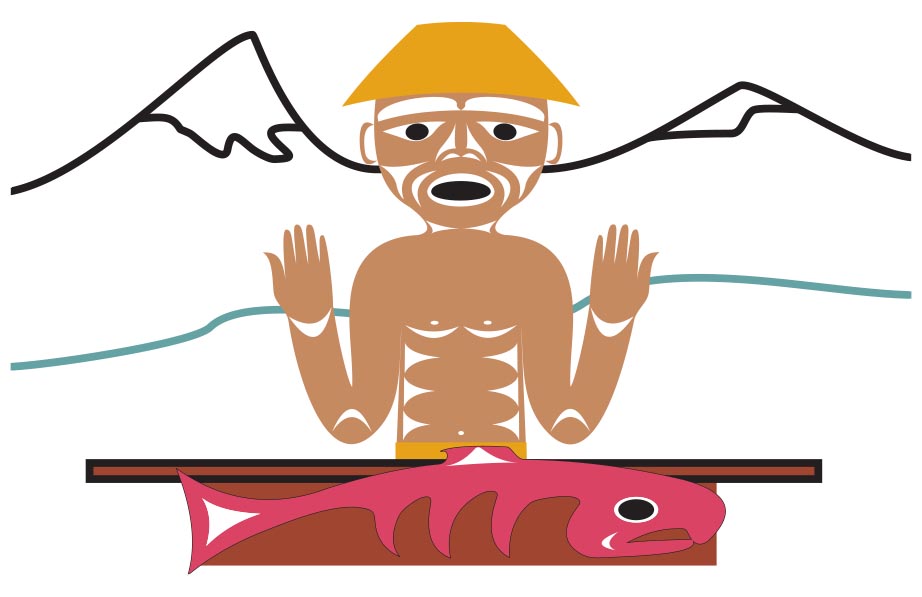 Adapted from a story told by Bernie Gobin Kia-Kia.

The salmon would come into the rivers each year and offer themselves as food for the people. The people would clean the rivers each year before the salmon arrived, and they would greet the salmon with a ceremony, and they would put the bones of all the salmon they had eaten back into the water. But as time went on, people became careless. There would be trash along the riverbanks and even in the water when the salmon came back. Often just some bones were returned; sometimes no bones were put back. Fewer and fewer salmon were arriving. People were thinking: "If this goes on much longer, we are going to starve."

One day a young man was walking by the shore. He was asking himself, "Why is it that just a few salmon are coming anymore?" All of a sudden, the water rolled back, and up walked a person from beneath the sea.

"I have been sent to bring you back to the salmon village so you can get an answer to the question you have been asking," he told the young man. "I will be your guide. There is another reason I was sent. Our leader is very ill. There is something he wants to say to you."

The young man walked with the guide out to sea. The carpet of water rolled back over them until the young man looked up and could see fish swimming up above.

"What misfortune has happened to the people of this village," he wondered. His guide seemed to know what he was thinking. "You see what happens when your people do not put back all the bones," he said. "When our people return to this home beneath the sea, parts of their bodies are missing."

His guide took him to the longhouse where the leader of the salmon lived. This man had been very sick since his return from the river by the young man’s village. "We have brought you here to see if you can understand the nature of our leader’s illness. Perhaps it is an illness from your world."

The young man was taken to a closed space at the back of the longhouse. An older man, very thin and wasted, was lying there with a fish hook stuck in the side of his head. The young man could see it clearly, but to the eyes of the salmon people it was invisible. "Young man, I hope you can help me," said the leader of the salmon.

The young man stayed with the salmon people as an honored guest for some time. He heard about the agreement between his people and the salmon, how his people were to clean the rivers, welcome the salmon on their arrival, and take care of the bones. He had been unaware of these teachings.

When it became time for him to return to his people, the salmon began to teach him songs for a salmon ceremony, how to welcome the arriving King Salmon, how to sing a farewell as the bones were returned to the sea. The salmon leader spoke to him: "This is a message for you to take to your people. Because it is hard for them to take care of the bones of all the salmon they eat, we will agree that as a tribe they will take care of the bones of just the first salmon. After that, each person will decide how they want to conduct themselves. Each year we will send a scout to your village, and he will report back to us. If the river is clean and the ceremony is held and the bones of this scout salmon are taken good care of, we will come back each year." The young man was given many gifts and sent with honor back to his people.

The young man instructed his people about the teachings that had been entrusted to him, and for a while everything went well. Then some people started to complain. "It is too much trouble to gather up all these bones. Salmon have too many bones. Even if it is only once a year, it is too much trouble."

The young man took the people down to the stream where the salmon were spawning. Some salmon were making their way completely out of the water, bruising themselves on the rocks, gasping for breath. Some with serious cuts in their bodies were resting in the pools before going on. Some had come to places where they had to jump ten times higher than any ʔaciɬtalbixʷ could jump, just to get to the next waterfall, where they would have to jump again. "Look how hard they are working to keep their side of the agreement," the young man said.

And so, even to this day, each year the salmon scout arrives to see whether the ʔaciɬtalbixʷ will continue to live up to their side of the agreement. Each year, the scout reports back to his people about whether the ceremony was held, how his bones were taken care of and whether the salmon habitat was well maintained.

Each year, so far. That is the end.