Value #5: We Show Respect to Every Individual

Lifting up the Sky 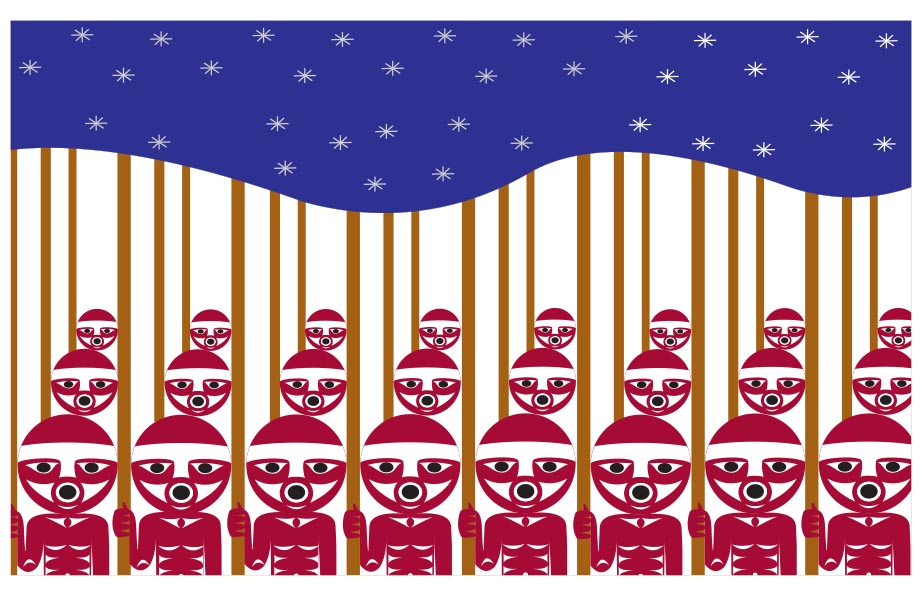 Told by xʷqidəb, William Shelton, extended by the Lushootseed Department

A long time ago, when all the animals were still human beings, the sky was very low. It was so low that the people could not stand up straight. Every time they tried to do so they would bump their heads. They called a meeting together and discussed how they could raise the sky, but they were at a loss how to do so. No one was strong enough to lift the sky.

Finally, the idea occurred to them that possibly the sky might be lifted by the combined efforts of the people, if all of them pushed against it at the same time. But then the question arose of how it how it would be possible to make all the people exert their efforts at exactly the same moment. For the different peoples would be far away from one another. Some would be in this part of the world, and some in another in another part. What signal could be given that all people would lift at precisely the same time?

Finally, the word yəhaw̓ was invented for this purpose. It was decided that all the people should shout yəhaw̓ together and then exert their whole strength in lifting the sky. In accordance with this, the people equipped themselves with poles. Everyone was included in the effort, even the smallest birds and insects. These little people would climb on the backs of the bigger people and raise their poles from there. When the time came, the people all braced their poles against the sky, and then all shouted yəhaw̓ in unison. Under their combined efforts, the sky rose a little. Some animals got longer poles. The little people climbed up on top of each other to get higher. Again, all the people shouted yəhaw̓ and lifted the heavy weight. They repeated this until the sky was sufficiently high. Just before the final push, the little songbirds, sensing that success was near, began to sing, throwing their songs high up into the air.

This story explains the origin of the custom of shouting yəhaw̓ when a number of people want to exert their combined strength in performing some strenuous work. The force is supplied in unison upon uttering the last syllable, which is drawn out very long, and the pitch of which is much higher than that of the first syllable. The word is used today when some heavy object like a canoe is being lifted. Today this word is considered a Lushootseed word, because the people have made good use of it.

After the sky had been lifted, everyone felt relieved. It was good to know that even the sky could be lifted by everyone working together, from the smallest to the biggest. But then after a while, people noticed that there was no birdsong in the air. It seems that when the sky was pushed up that last time, the birdsongs in the air were pushed up with it and got stuck there.

All of the birds had a meeting. All of most powerful birds with the biggest wings volunteered to fly up and try to get the songs back out of the sky. The Great Horned Owl flew up, but he could not even get close. All the different Hawks, Falcons and Eagles flew up with all their might, but none of them could make it. Little Winter Wren, the smallest bird then said, "I think I could do it." The big-winged birds all just looked at her. "How could a little thing like you do what all of us can’t do?"

Only the Bald Eagle said, "Let us listen to her plan. She sees things from a different point of view." The Winter Wren said that she would get on the back of the bird who could fly the highest, and then take off from there and see if she could get even higher. Bald Eagle said, "It is worth a try. Climb on my back." He took off and flew way up into the highest reaches of the air just below where the sky world starts. Then Winter Wren flew off, up as far as she could go. It was just a few feet, but it was enough for her to close her claws around the songs where they were stuck in the sky and pull them loose. She and the songs were carried back to earth on Eagle’s back.

When they landed on earth, all the birds with big wings were embarrassed. Little Winter Wren started to hand out the songs. All the little birds, her relatives, got beautiful songs. (After all, she was only human.) The medium-sized birds got good enough songs. When it came time for the birds with big wings to get their songs, only croaking and honking and shrieking ones were left. That is why none of the big birds has a pretty song today. Only the Eagle got a pretty song. He understood that everyone, no matter who they are, can make a difference, and he gave Winter Wren a chance to prove herself. That is why if you hear him today, he makes a sound like a small bird, almost like a chirping, and it is very nice to hear. When you hear him, you might remember this story and its teaching. And you might remember that yəhaw̓ belongs to our language. That is the end.